It’s been a while since we lasted posted on our wine making antics. A quick recap on where 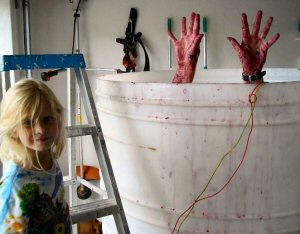 we were at last November. According to our well read ‘Guide to Wine making’, malolactic fermentation (which is the second fermentation which takes place in the closed tank) should take about seven weeks.

Basically what happens is that stuff in the wine called malic acid has to be converted to other stuff called lactic acid. This is a pretty simple process done by very clever bacteria. Unfortunately our very clever bacteria weren’t doing their job. So following our experts’ advice, we had heated them up, fed them with some yummy (and expensive) food, swirled and stirred, but after nine months in their sealed tank they just weren’t cooperating. Wine Times were dire indeed and we even considered pouring our precious grape residue down Eddies drain! A final consultation with our wine expert suggested that our clever bacteria might have passed on. In that case no amount of stirring, feeding, heating or wine dancing would have any effect.

A final trip to Vinlab was planned to test whether there were in fact any bacteria left alive. Sure enough our precious lactic acid converters had all perished. Apparently something not uncommon with Merlot, especially in a poorly controlled environment like Eddies garage. Pity no one had thought to suggest this earlier as we would have saved on many trips to Stellenbosch and significantly decreased the carbon footprint of our wine making escapades. What followed was an operation of military precision; Eddy shot off to Protea Chemicals in Cape Town and returned with a small sealed cooler box filled with dry ice enclosing our new, fresh, and very much alive bacteria. We stirred them into the tank and a week later, and some eleven months after pressing, our 2011 Merlot was finally 100% fermented and ready for drinking.

Now while most modern wine makers use fancy fining agents to remove tannins from their wine, we took twenty of Matthews best free range chicken eggs, separated the whites, mixed in a pinch of salt and beat them until slightly foamy (but not stiff).Having mixed this with ten parts wine we stirred the mixture into the rest of the wine. Over a two-week period the Matt’s egg whites sink down through the wine grabbing hold of the tannins, making it softer, rounder and clearer.

Our 2011 Merlot was bottled in February 2012, just in time to prepare the tanks for this year’s harvest and pressing – and oh what a story that was……………..